Broadcast number 30 is fast approaching. We will of course be broadcasting both games of this doubleheader. As always... 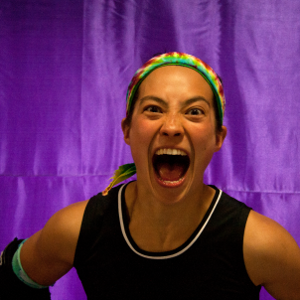 What got you in to derby?

A friend of mine took me to watch a bout several years ago, and I thought it was one of the most cathartic things I’d ever experienced. So I wandered over to a Fresh Meat Night the following month!

Who’s the blocker / jammer you find the most challenging?

I gotta give a shout out to the Mass Maelstrom guys here… I swear, I always spend about a minute and a half each jam stuck behind Stryker whenever he’s on the track.

I love polished wood – the Furies just played at CTRG earlier this month, and their floor was awesome. In terms of the whole venue, we played Central Maine at the Cross Center in Bangor last year, which made us feel like superstars! Those locker rooms alone were palaces.

I make an excellent granola with coconut oil and maple syrup. But if I’m not allowed to toot my own horn, then I choose Honey Graham Oh’s and Cracklin’ Oat Bran. Those ones are fantastic.

Tell me about your skate setup!

I have no idea. The toe guards don’t even match. Not a gear-head.

I’d like to jam a two-minute jam, and maintain a high level of power and speed the whole time.

Who the team you’d like to have on your schedule?

We’d probably benefit tremendously if we had the chance to skate against one of Boston’s home teams… Cosmonaughties? Call me, maybe?

Anecdotally, it seems to me that we could use some more female announcers. Especially if they can throw in some fun facts and witticisms.

Thanks to Rammy for taking the time to answer our silly questions.  We had the pleasure of watching all of the Furies at  A8OTF 2014 and were VERY impressed.  WMRD vs. WORD still one of our favorites!

Do you or someone you know want to tell us about themselves?  Let us know!  We’d love to talk about you!  nerderby@gmail.com

Thanks to TUGBOAT of Casco Bay Gentlemen’s Derby for taking time to answer some of our silly Tigerbeat / Bop! magazine questions. Enjoy!

TUGBOAT, I do spell it will all caps and no trick spelling. Something like Tugbowt or 7|_|980@7 seems silly. Originally I was Wrexcalibur but back when two evils was a thing and you were supposed to register names it came up too similar to many other names like Bexcalibur, Flexcalibur and one I’m not going to type here because it wouldn’t be appropriate to say in front of an all ages crowd. Wrexcalibur was inspired by my favorite character from an anime, Soul Eater, named Excalibur. Look him up, he’s awesome. TUGBOAT… well that just kinda happened.
What got you in to derby?

My first experience with modern flat track roller derby was when my band, The Pubcrawlers, played pregame and half time for a bout at the Portland Expo. It was MRD v Montreal and I remember that the Port Authorities absolutely murdered the New Skids On The Block. After that I started going to games and began to think to myself, “this sport is awesome, do men play?” I Googled it that night and the following day 7/3/2011, the Not So Jolly Rogers were born. It took a bit to get rolling, but we’re still here and we aren’t going anywhere.

Who’s the blocker / jammer you find the most challenging?

When I am jamming, Jamazon- formerly InfraRed, always has my number. She seriously messes me up. When I’m blocking, it is a toss up between two jammers I find most challenging. My teammate and captain Dark eVader is absolutely amazing. His balance between hard hits/ pushing and amazing foot work is a tough combination to beat. Not to mention his apex jumps that probably could clear anything Evel Knievel ever jumped. The other jammer I put in that category is my lovely fiance Grim D Mise. Her foot work and unpredictable movements are insane. Couple that with her incredible knowledge of the game and experience jamming against top level blockers- like team USA people and she is easily in a whole different league of playing than I am. When I watch her jam it’s like water… not water flowing placidly down a steam, not even like a class five rapids, water that’s like an avalanche coming down a mountain.

Honestly, I love the floor at our home base, happy wheels.

I’m not much into cereal. I usually have one of the following: an omelette, a protein shake, or a peanut butter sandwich with an IPA on the side… if it’s the weekend and I don’t have a game… or practice… or a scrimmage to ref.

Tell me about your skate setup!

I have two, I only feel it appropriate to share one here. I want to get picked for the all star scrimmage at NEDC. If the other happens I will let the world know that one of my bucket list items has been accomplished.

Who the team you’d like to have on your schedule?

I’d love to get the play the Quadfathers, Jersey Boys and the PennJersey Hooligans. Slam, I’m calling you out.

I’ve tried to answer this question three times now. The two previous times I went on rants about the misconceptions that people have about the derby athlete. However that doesn’t properly answer the question. What the sport needs is you. If your reading this you’re likely already a player, official, volunteer, whatever title. You’re already a part of the community. The sport exists because of you. It doesn’t exist to get the attention of the Olympic committee, or ESPN, or Hollywood, although it has already gotten those. It exists because of the players, the fans, the officials, the people that believe it can be bigger and stronger and any of the individual parts… and it needs more people like you, like me, like all the other people in the community that you know. It needs the love to be spread. And it starts with well, you.

We’ll be back again soon with MORE derby peoples!

Battle of the All Stars PA vs NY